Kleptocracy comes from the Greek words, “kleptes” (meaning ‘thieves’) and “kratos” (meaning ‘strength’). Thus, a kleptocratic government is a group of political body where officials are politically corrupt and financially self-interested. 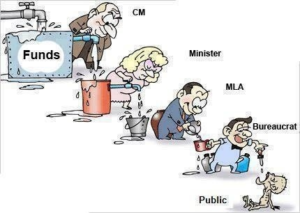 Kleptocracy comes from the Greek words, “kleptes” (meaning ‘thieves’) and “kratos” (meaning ‘strength’). Thus, a kleptocratic government is a group of political body where officials are politically corrupt and financially self-interested.

Historically, it was found as a system in ancient Greece, but in society, the system of “governance by thieves” is more perfect due to the nature of states and leaders. Kleptocrats usually refer to public money as if it were their personal bank account, spending money where they consider it necessary. Many kleptocrats also covertly transfer budget money to classified bank accounts in foreign countries, so as to ensure a luxurious existence in case of their removal from power, or, if necessary, escape from the country.

The Party in power actually forms a system of organized theft. In order to survive and advance, it is forced to pretend to defend certain “values”, while its main task is to provide financial support to those who support it.

Kleptocracy describes the situation in a country where the corruption of the highest political institutions has been brought to a level when the government exists only for the personal gain of the individual and parties that make it, at the expense of the wider population and often out in the open.

Kleptocracy is characterized by corruption, lobbyist, money laundering, and neglect of long-term goals. In states where kleptocracy rules, the authorities have public property as their private property, and they either spend money on their own luxury or transfer them to accounts of foreign countries, thus providing themselves with a comfortable life in exile in case of loss of power.

The kleptocratic practice occurs in various forms, such as setting up companies that are sold to the government or members of his family, extorting money from business people for “humanitarian actions”, the ruling party embezzling money from state funds and turning foreign investments to their advantage. The consequences of such a regime cause the weakening of the state economy, state policy and civil rights. The money that kleptocrats steal is often taken from funds laid aside for the construction of public needs, such as hospitals, schools, roads, parks – which additionally enhances the quality of life in the country that is managed by kleptocrats. Kleptocracy disregards the multiparty authority due to the association of political elites, and thus
undermines both democracy and any other political format under which the state is.

For over twenty years, they have been trying to convince us that they were building democracy. We are still convinced that they are only interested in material values. We are economical at the bottom – among the poorest countries of the world. Modern Nepalese government has many names- pseudo-democrats, traitors, elitists and one of the main names of the Nepalese government is…..kleptocrats. Systematic theft leads to the fact that officials and entrepreneurs who refuse to participate in corrupt schemes, in various ways, move away from power and business. They do not just steal- they teach how to steal from the whole country.

Impunity, prevarication, bribery, political corruption, and misuse of public power to obtain illegitimate advantages in a secret way are the forms of cronyism that leads to kleptocratism.

The appointment of different positions in the government by taking money proves that this country is not only controlled by kleptos (thieves or thieves). They have evolved, from klepto to mafioso (the organization called the mafia). The mafia helps to elect a politician to gain power. They use illicit money from bribery, corruption, project mark-ups and budget lapses for the campaign.

Power is necessary to perpetuate hegemony, political power, authority, capital power as well as the power to monopolize the law. Law and justice need to be mastered to protect their colleagues who are involved in legal matters. Minimum punishment is light, and when sentenced, they go to prison but can go in and out as they desire.

The characteristic of the kleptocratic state, among others, is that the level of corruption in the bureaucracy is very high. This bureaucracy refers to the executive, the legislature, and the judiciary. Kleptocracy often enriches its corrupt bureaucrats and partners by exploiting natural resources. People’s prosperity is often sidelined for the sake of gaining power and possessions.

The crime of corruption in Nepal has reached a chronic point. The decline or lack of improvement in ‘political accountability’ is almost certainly one of the main problems of Nepalese political development.

This fact can be seen from the continued spread of corruption cases or bribery involving many public officials (ministers, former ministers, governors, mayors, district heads), members of parliament at various levels or political party leaders. Political accountability is one of the important elements of democracy, to work well and to bring the most benefit to all citizens. Political accountability refers to the obligations and responsibilities of public office holders to take policy and take steps for the public interest as a whole. Otherwise, the relevant public office holds legal and political consequences. Kleptocracy threatens democracy. If idiocracy is a dictatorship of stupidity, then kleptocracy is a higher degree of idiocracy.